The Greek Islands: How Were they Named? 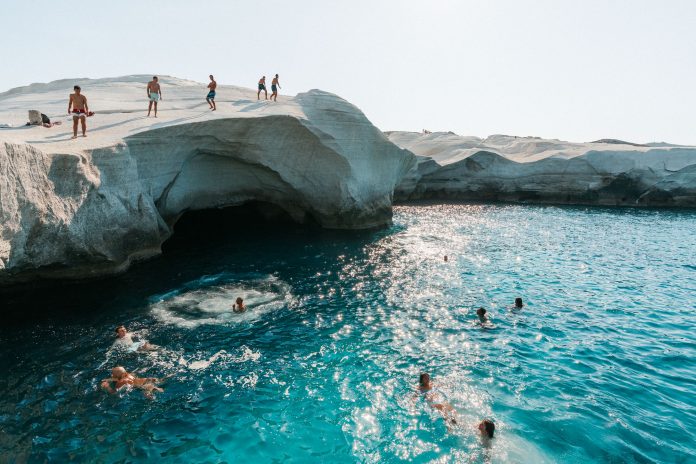 To find the etymology behind the names of Greek islands, one should take into account a number of factors, including ancient Greek mythology and even the geomorphology of each place.

In fact, during ancient times, the names of places were used as a way of recording notable geological events. “Anyone who can read between the lines, will know the history of Greece…Names hide memories,” said author Giorgos Lekakis.

Cephalonia: The island got its name from the mythological hero Cephalus, the island’s first ruler, who was an Athenian leader and the son of the god Dionysus. Cephalus, who was exiled from Athens for committing murder, settled on the island.

Chios: This Greek island acquired its name from Chioni (snow), the daughter of the Greek god Poseidon. The story goes that it was snowing when she was born on the island. According to legend, the island had been a desert. After the snowfall, the land became fertile.

Samos: This name is derived from the Mycenaean word “sami” or “samos” which means “hill near the coast.” The topography of Samos fits its name since the island indeed has many mountains and hills.

Lefkada: Homer named this Greek island from the Greek word “lefkas” or white since, according to this legend, the soil used to be white.

Kos: The name derives from “kofos,” an island with many caves. The word “cave” itself also derives from the Greek word “kofos.”

Ithaca: This name derives from the Greek word “ithys,” meaning straight and long, or in other words, the elongated island.

Sifnos: This island was named after the Greek hero Sifnos, the son of the hero Sounion; he was the island’s first inhabitant.

Paxos: This name derives from the word passion (“pathos” in Greek). The Greek God Poseidon, who had fallen madly in love with the nymph Amphitrite, could only make her love him if he gave her a piece of land that was her own. Hence, he cast his trident, cutting off a piece of the island of Corfu, which moved a bit to the south and gave it to the nymph.

Angistri: In ancient times, this island was called Kekrifalia, which meant reef, because of its size and shape. Later, however, it was renamed to Angistri (hook) because it is “hooked” to Aegina.

Poros: Poros is actually two islands. One, called Spheria, is named after Spheros, the charioteer of Pelop’s chariot who died and was buried on that island. For the record, the Peloponnese was also named after Pelop. The other island was Kalavria (meaning “good aura” in Greek), named so because it had a good aura. Later on, a single name was given to both islands because there is a small opening, or passage (“poros” in Greek) that separates the island from the mainland town of Galatas.

Aegina: This island, located near Athens, owes its name to Greek mythology—more specifically to the daughter of the ancient Greek god Asopus, who was named Aegina. According to the legend, Zeus fell in love with the girl and took her to the island, which used to be named Oenone but was later given the girl’s name.

Alonissos: The name derives from the ancient Greek word “als” (sea) and the word “nisi” (island). It literally means an island in the middle of the sea. Even though Alonissos was named Ikos in ancient times, it was renamed in 1838.

Andros: The island was named after the Greek hero Andros or Andreas, a famous oracle, who was so great that he was given the island as a gift by Rhadamanthus, the brother of the legendary king Minos.

Amorgos: This island’s name derives from a plant called amorgi, a type of flax, which was used by ancient Greeks to make linen. Garments from Amorgos were very popular in ancient Greece.

Euboea: The name of this island means “the land of great cattle.” It was named Euboea due to the large number of cattle herds that roamed its mountains and hills.

Zakynthos: This name comes from Zakynthos, the son of King Dardanos of Troy. When the Trojan expedition came to an end, Zakynthos and his people fled from Troy and supposedly lived on the island.

Kythera: The name of this island actually means “in secret” because Aphrodite was born there in secret, according to Greek mythology. According to the legend, the goddess was born from the waves near Cyprus, but she was then put in a shell to keep her birth a secret. She was taken to Kythera, where she was kept in hiding until she grew up.

Lemnos: There are two interpretations for the name of this island. The first one has it that it comes from the Greek verb “leivo” which means “full of water,” and, according to the second, the name comes from the word “liion pedion” which means rich plain due to the island’s plains.

Milos: This island was named after the Greek mythological hero Milos, who was the island’s first inhabitant. When Milos went hunting in Cyprus, he met and befriended Adonis. When Adonis died, Milos committed suicide under a tree.

Naxos: In ancient times, the island was named Dia after the greatest of all Greek gods, Zeus, (“Dias” in Greek) because it was the largest island in the Cyclades. It was renamed when Naxos, the son of Endymion, settled on the island.

Paros: In Greek, Paros means beach. It was accordingly given this name because of its many beautiful beaches.

Skiathos: This name derives from the word “skia” (shade). Due to the large number of trees, this Northern Sporades island is very shady and verdant. However, others believe that it was given the name because it is located in the “shade” of Mount Athos.

Ikaria: This island was named after the Greek mythological figure of Icarus, who attempted to fly with wings made of feathers fastened to his body with wax. When his wings fell off, he fell into the sea and the waves washed his body onto the shores of the island.

Crete: This name means mighty, strong, and powerful. Crete at one time had one of the largest navies that ever existed on the earth. Its first guardians were named the Curetes.

The Greek regional airports managed by the German Group...
Read more
Previous articleGreek Hoteliers Angry Over Airbnb Inclusion in ‘Tourism for All’ Scheme
Next articleGreece Flight, Passenger Numbers Up in First Half of Year
MykonosTravel