Monastery in Mykonos: The Picturesque Monastery of Panagia Tourliani -The “Other Side” of Mykonos 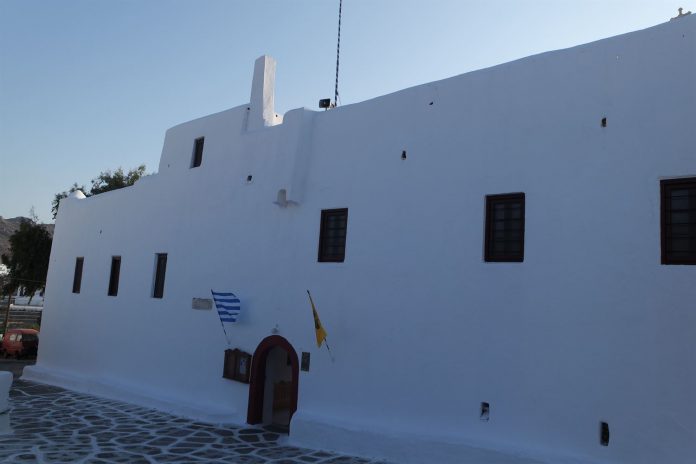 The Monastery was founded in 1542 on the base of an older church. It was built to honor the Assumption of Virgin Mary and was renovated between 1757 – 1767 by monk Ignantios Mpasoulas. The baroque-style temple, the bishop’s throne and the pulpit (end of the 18th century) came from Florence whereas the paintings were made by iconographer Ioannis “ton ek ton Kerkiras” (=the one that comes from Corfu)

The architecture of the building is very impressive. The decoration of the bell tower and the fountain are stereotypical examples of traditional Cycladic marble carving. Among the various collections of the monastery, there are numerous old tools and utensils, important religious relics, vestments, furniture (a wooden crafted epitaph, desks etc.), post-Byzantine paintings and various other items.

Summers in Mykonos are guaranteed as the number one destination to spot celebrities, but apart from entertainment spots the island has a historic monastery, the monastery of Panagia Tourliani located in the village of Ano Mera.

The Monastery of Panagia Tourliani in Mykonos, Cyclades: is 8km away from Chora town, in Ano Mera village. The construction was originally built in 1542 by two priests and was initially named after the Presentation of the Virgin Mary. The monastery was restored in 1767 and took its present name after an icon of the Virgin Mary found in the nearby area of Tourlos. Since then, Panagia Tourliani became the patroness of the island and its construction is celebrated on August, 15th.

The architecture of the monastery is rather impressive, with a whitewashed exterior and a colored dome. A beautiful marble fountain is found in the yard outside the church. In the interior of the church, one can see an impressive wooden iconostasis (altar screen) made in 1775 by Florentine artists.

There are icons of apostles and saints on the iconostasis as well as scenes from the New Testament. The screen is decorated with green, red and golden flowers. The hanging incense holders are decorated with silver dragons having red eggs in their mouth, which show the Eastern influence.

The monastery also has a small ecclesiastical museum which includes wood carvings, embroideries, vestments, holy icons and the first bells of the monastery.

Panagia Tourliani used to be very important for the local economy and the community of Ano Mera has developed in the same area as the monastery.